Debretsion Gebremichael, the most dangerous person in TPLF

The death of dictator Meles Zenawi has left the Ethiopian ruling junta, TPLF, in disarray. Because Meles did not put a succession plan in place, TPLF and its umbrella organization, EPRDF, are now engulfed in a dangerous power struggle that could erupt in a bloody clash. 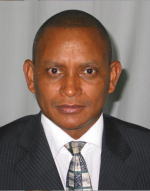 The most dangerous of all these guys is TPLF Politburo member and Minster of Communication & Information Technology Debretsion Gebremichael. All the TPLF/EPRDF intelligence and security apparatus report to him. He chairs the join security commission whose members include Getachew Assefa, head of the National Intelligence and Security Service (NISS), and Workneh Gebeyehu, head the Federal Police, among others. His agents and assassins are also embedded through out the bureaucracy and the military. In short, Debretsion is the Henrich Himmler of TPLF.

Before becoming a TPLF politburo member, Debretsion was responsible for jamming radio and TV signals, blocking web sites, tapping phones, other forms of electronic security. Before that he was a spy and member of Meles Zenawi’s death squads who were sent out at night to knock off opponents.

Now Debretsion is the one who is expected to execute decisions if TPLF decides to carry out purges and assassinations in EPRDF. According to Ethiopian Review sources, Debretsion is currently tracking the movements of Hailemariam Desalegn and all those who are suspected of posing a threat to the TPLF domination. He listens to their phone conversations, records all their meetings, and their bodyguards report to him any suspicious activities.

If Hailemariam wants to have any chance of survival, he must move to immediately fire Debretsion and appoint some one who is loyal to him. Otherwise, in the coming few days it is possible that Hailemariam will be another Teferi Benti, Aman Andom, or Atnafu Abate.