An international incident in California over an Ethiopian flag 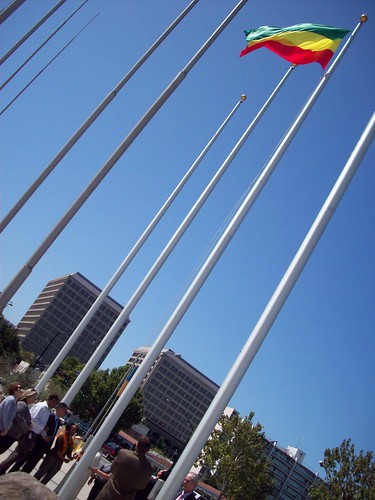 (MercuryNews.com) — An international incident of sorts arose over an Ethiopian flag raising at San Jose City Hall to honor the African country’s New Year, which begins on Sept. 11. And it wasn’t over the unfortunate coincidence with what is now a day of infamy and national mourning in the US.

Rather, the dispute was over whether or not the city raised the right green, yellow and red Ethiopian flag.

Yohannes Mesfine, an Ethiopian-American businessman who lives in Palo Alto, says it didn’t. The banner that went up lacked the national emblem — a light-blue disk with a yellow pentagram symbol — which the country adopted in 1996. That’s the flag that the U.S. State Department recognizes.

Nonsense, says Abebe Hailu, who represents the Ethiopian American Council in San Jose. He said the plain tricolor “heritage flag” that went up is just as acceptable, arguing it doesn’t change with the political winds in their native country. A city resolution allows San Jose to recognize that flag.

Mesfine — who attended the flag-raising ceremony on Monday, the day before Sept. 11, out of respect for the victims of 9/11 — was so put off that he alerted Mayor Chuck Reed and city Councilman Sam Liccardo, both of whom attended the ceremony along with Hailu and dozens of local residents of Ethiopian descent.

With no reaction from either city official, both of whom noted the city’s resolution, Mesfine contacted the Ethiopian Consulate General in Los Angeles. An email to Reed from the consulate general’s office thanked the mayor for honoring the occasion but pointed out that any flag that doesn’t contain the emblem is illegal under the Ethiopian constitution.

City officials say similar debates have surfaced involving the flag of the former Republic of Vietnam and the Pan African flag.

“My decision to support the flag-raising has nothing to do with any feeling that I have toward any regime or government,” said Liccardo, whose district includes the Ethiopian American Center and many of its members. “It has everything to do with our solidarity with a community of people living here in our city. What’s far more relevant to me is the identity chosen by our community, and not that chosen by any foreign entity.”

San Jose Public Works Director Dave Sykes said the city will evaluate the issue before whatever version of the Ethiopian flag goes up next year.

“We want to be respectful of the concerns and address them appropriately,” Sykes said.