Can You Spare a Dime for T-TPLF Ambassadors? 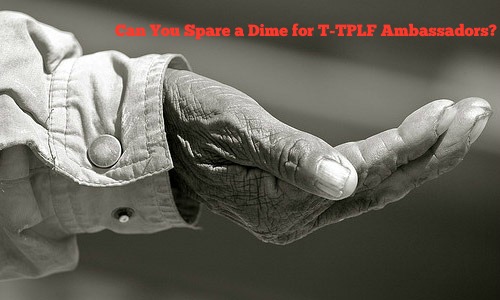 A few days ago, I read a heart-rending  article  about the serious cash flow problems the diplomatic missions of the Thugtatorship of the Tigrean People’s Liberation Front (T-TPLF) are facing worldwide.

According to the malaria-researcher-turned-“Ethiopian”-foreign-minister-overnight, Tedros Adhanom, “Ethiopian diplomatic missions abroad” are experiencing a “challenge of accessing foreign currency.”  Adhanom moaned and groaned about a serious cash flow problem. “We know that we were supposed to indicate a 100 percent budget implementation in our plan. We have challenges that prevented us… One of the biggest challenges is that we are suffering from hard currency shortage especially for the execution of diplomatic missions in most of our embassies and consular offices.”

“Suffering from hard currency shortage” sounds very much like, “We are flat broke!  We can’t make ends meet. We are feeling the pinch. We just used up our bottom dollar. Our diplomatic missions are going bust. We have fallen on hard times.”

Most importantly, Adhanom is saying, “Our diplomats ain’t gonna afford no French champagne, no French cognac and no Johnny Walker Scotch Blue.”

Quick! What can be done to save the “suffering” poor T-TPLF diplomats?

What can I do to help?

Well, my first reaction was, “Why don’t they eat cake?”

I mean, why don’t they just print the currency of every country where they have diplomatic missions and spend it like a drunken sailor?

The T-TPLF spends money like they print money. Duh! They DO print money!  So, print more monopoly money.  What’s the problem?

Apparently, it ain’t that easy to print greenbacks or Euros. Those currencies have to be earned or acquired on the  foreign exchange market where they trade currencies.

The super-big banks run the Forex markets and determine the relative values of different currencies in the trillions of dollars and Euros everyday. They have all kinds of trading deals like spot transactions, currency and exchange swaps and other fancy stuff.

How about using some of the stolen loot from international aid and loans, kickbacks on no-bid contracts and stuff to alleviate the “suffering” of the T-TPLF diplomatic missions?

In Gangasta’s Paradise of Ethiopia, it’s about “Power and the money, money and the power/ Minute after minute, hour after hour.” Forget ‘bout it!

Well, how about, how about skimming off of the secret slush fund from ten years of double-digit growth?

In October 2015, T-TPLF president Teshome bragged,  “We successfully completed the implementation of the growth and transformation plan… we will continue to deliver the sustainable, rapid, double-digit economic growth, which was registered in recent years… about 11%” for the next five years.”

“Double-digit economic growth in recent years” and “11% for the next five years”! Doggone it! Them T-TPLF fat cats must be drowning in cash.

Sorry, no cash there. It’s all lies, damned lies and statislies!

Last year, Adhanom said Ethiopia is on track to eliminate poverty and become a middle income country by 2025.

A country on track to becoming a “middle income” country can’t cover the basic expenses of its embassies abroad?

Yep!  Adhanom says, they are “suffering”.  They are dead broke.  T-TPLF diplomatic missions abroad don’t have a pot to piss in.

How about dipping into all of the panhandled money to build the “Grand Renaissance Dam” to alleviate the “suffering” of T-TPLF missions?  There’s got to be a few million dollars sitting in that GRD piggy bank. (I did not say Pigs’ Bank.)

This past September T-TPLF said, “Ethiopian Diaspora” dropped a cool 600 million birr in the GRD strongbox. How about temporarily raiding that squirreled away cash?

No can do! That money was long gone with the wind. (I did not say that money never left America or Europe. Nor did I say it is sitting in American and European banks for a rainy day for T-TPLF bosses. Talking about rain, the T-TPLF should know, “A hard rain is gonna fall.” That was Bob Dylan back in the day. “And it’s a hard, it’s a hard, it’s a hard, and it’s a hard It’s a hard rain’s a-gonna fall.”  No floods after the hard rain. “God gave Noah the rainbow sign. No more water, the fire next time.” That was a prophesy told in the lyrics of a song of African slaves toiling on the cotton and tobacco plantations in America.)

I always wondered how the T-TPLF could build the largest dam in Africa with nickels and dimes collected in America. Hmmm!

Here is a tagline the T-TPLF could use in future fund-raising: “Can you spare a dime for a dam?”

Seriously, so what is to be done?

I guess the only option left is to pass around the hat. We all need to get in gear and chip in for the professional T-TPLF panhandlers. Sorry, I meant diplomats whose job is to pound the pavement of the capitals of the industrialized countries to panhandle aid and loans.

The T-TPLF ain’t too proud to beg.  You ought to read my commentary the “Baksheesh (Beggar) State in Ethiopia”.

Adhanom said the T-TPLF is starving for cash today. (I did not say 15 million Ethiopians are starving today.)

Adhanom is subtly putting out an S.O.S. asking (I did not say begging) if we could all chip in a dime, a nickel or a quarter and help out the “brothers” and “sisters” stranded in foreign embassies and missions. They need a little cash to get a few bottles of champagne, cognac and whiskey. Of course, they don’t need the libations  for rest, relaxation and entertainment. They need it to forget their “suffering”.

Yeah! Right. The T-TPLF is “suffering”. The Ethiopian people are suffering!

Anyone?  Alms for the poor and “suffering” T-TPLF “diplomats” stranded in foreign lands?

I hope those diplomats  won’t resort to thugging. Remember that T-TPLF “diplomat” who opened fire at the T-TPLF embassy in Washington, D.C. in October 2014? I talked about it in my commentary, “The Thugplomacy of the TPLF”.

When push comes to shove and the cash flow dries up, them guys may just switch from diplomacy to thugplomacy. Stick’em up! I am just sayin’!

Teshome can’t be serious! Didn’t he get Adhanom’s memo that the diplomatic missions are “suffering”?

It seems like Teshome is sending off the “ambassadors” on a “successful” diplomatic kamikaze mission.

Adhanom told the ambassadors at the same event “that they need to engage vigorously in building the image of Ethiopia, reflective of the leap in economic growth and development.”

Really! The “ambassadors” don’t got a pot to piss in and now they are expected to “vigorously” propagandize about “leap in economic growth and development”?  (A leap into beggary is more like it.)

Can be done only by ambassadors from Planet T-TPLF!

Here is food (question)  for thought: If T-TPLF’s  diplomatic missions abroad are “suffering from hard currency shortage”, how hard could the hard currency “suffering” of the T-TPLF bosses inside the country be?

Reading between the lines of the September 2015 IMF Report, the T-TPLF is flat broke.

The IMF says, the T-TPLF’s “medium-term objective [is to have] foreign exchange reserves cover three months of the following year’s imports of goods and services.”

Put another way, in the short term the T-TPLF is flat broke in their “Gangstas Paradise”.

Anyway, if you see any down and out T-TPLF diplomats sitting curbside with begging bowls, have a heart and drop ‘em a dime or something?

It’s good for your soul!