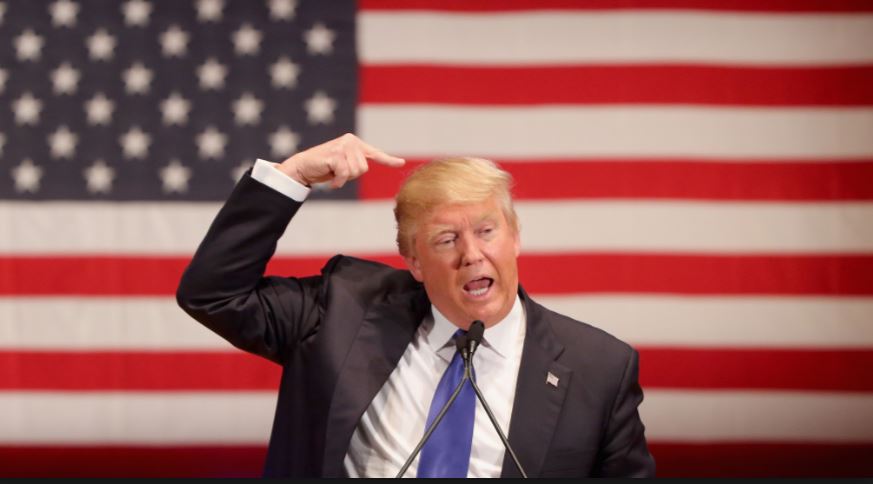 Insane in the brain?

In my July 25  commentary entitled “Cry Havoc! And Unleash the Dogs of War at the Republican Convention?”, I argued that Trump is a very dangerous demagogue hell-bent on starting a civil war in America.

In his convention speech Trump said, “I am your voice. I have a message for all of you…”

In his message to supporters a couple of days ago in Wilmington, North Carolina, Trump cried Havoc! and called for the unleashing of the dogs of war – the assassins of the “Second Amendment people” – against Hillary Clinton:

Didn’t Wayne La Pierre, chief of the National Rifle Association, mail out hundreds of thousands of flyers  in August 2008 telling members that presidential candidate Barack Obama wants  to ban the possession of handguns, and that “never in NRA’s history have we faced a presidential candidate — and hundreds of candidates running for other offices — with such a deep-rooted hatred of firearm freedoms”?

Does Hillary have a more “deep-rooted hatred of firearm” than Obama?

Since January 2011, more than 100 gun control proposals have been introduced in the Republican-controlled  Congress.

How many were passed into law?

But “if you tell a big enough lie and tell it frequently enough, it will be believed.” By the “Second Amendment people”, that is.

Who exactly are the “Second Amendment people” Trump is talking about anyway?

Are the “Second Amendment people” different from the rest of the American people?

Does Donald “Ignoramus” Trump have a clue  about what it takes to “abolish” the Second Amendment?

I want to ask Trump a much, much easier question than the one Khizr Khan, the father of American hero Army Captain Humayun Khan,  asked him: “Donald Trump, have you even read the United States Constitution?”

I ask Trump: “Have you read the first sentence of Article V of the U.S. Constitution?”

Khan offered Trump his copy of the Constitution.

Not me. Donald Trump!  “I’ll give you my copy of the Constitution when you pry it from my cold, dead hands!” (Gee whiz! That sounds like what the “Second Amendment people” would say, doesn’t it.)

Of course, not only would I gladly give Trump my cherished and dogeared copy of the Constitution, I will happily school him in the majestic principles of the U.S. Constitution.

The only way the U.S. Constitution could be “abolished”, modified or changed — amended — is by the “Congress, whenever two thirds of both Houses shall deem it necessary, shall propose Amendments to this Constitution, or, on the Application of the Legislatures of two thirds of the several States, shall call a Convention for proposing Amendments…” (Art. V.)

Neither Hillary Clinton nor any judges she appoints has the power to “abolish” the Second Amendment.

Even a hundred proposals in Congress to “abolish” the Second Amendment will not do.

But what exactly is Trump telling his Second Amendment Trumpteers  and Musketeers to do?

Trump says if Hillary “gets to pick her judges, [there is] nothing you can do”.

But then again there may be “something” the “Second Amendment people” could do to deal with the situation once and for all. Wink, wink!!

Is Trump sending a coded message to the John Hinckleys and the other zombie wingnuts and wacos of the “Second Amendment people” to do “something”?

Just last week, John Hinckley, the man who tried to assassinate President Ronald Reagan and was found not guilty for reason of insanity, was released from a psychiatric hospital after a 35 year commitment. How strangely ironic!

What exactly is Trump’s message?

Take out Hillary so that she “does not take away your guns”?

Grab your AR15 assault rifles and run into the hills?

Arm yourselves to the teeth on November 8, 2016 and vote with your bullets?

The Trump campaign, as usual, tried to backtrack: “It’s called the power of unification — 2nd Amendment people have amazing spirit and are tremendously unified, which gives them great political power.  And this year, they will be voting in record numbers, and it won’t be for Hillary Clinton, it will be for Donald Trump.”

But Trump did not say, “Although the Second Amendment people, maybe there is, I don’t know. They can vote in record numbers.”

What Trump did not say in his conveniently veiled threat speaks volumes.

The Clinton campaign did not buy it: “This is simple: What Trump is saying is dangerous. A person seeking to be the president of the United States should not suggest violence in any way.”

But there are those who actually “know” what Trump says he does not “know”.

Sen. Elizabeth Warren (D-Mass.) took to social media to say she knows what Trump does not know: “Donald Trump makes death threats because he’s a pathetic coward who can’t handle the fact that he’s losing to a girl.”

Hell! How about clobbered and shellacked by a lady?

Warren added, “Your reckless comments sound like a two-bit dictator.”

Trump does not sound like a “two-bit” dictator. Trump is a wannabe African thugtator.

Trump’s V.P. Pence also tried to explain that Trump was not suggesting violence: “Of course not, no. Donald Trump is urging people around this country to act in a manner consistent with their convictions in the course of this election, and people who cherish the Second Amendment have a very clear choice in this election.”

What is the clear choice? The assassination of Hillary Clinton by “Second Amendment people”?

House Speaker Paul Ryan tried to play it down,  “I heard about this Second Amendment quote. It sounds like just a joke gone bad. I hope he clears it up very quickly. You should never joke about something like that.”

Has the Republican Party become a joke?

Trump said he was not joking when he said what he said about the “Second Amendment people”: “I have to say, in terms of politics, there is few things, and I happen to think that if [the media] did even bring this up, I think it’s a good thing for me.”

Trump is not joking. No one should take what Trump says as a joke.

No one should take what Trump says as an isolated anecdote. It is important to consider Trump’s statements  in the broader context of what his advisors and those closest to him have been saying and urging over the past year.

At the Republican Convention,  a Trump  advisor  and a New Hampshire state representative, Al Baldasaro, issued a death warrant to lynch “Hillary Clinton [who] should be put in the firing line and shot for treason.” He later  added  “As far as I’m concerned, it is treason and the penalty for treason is the firing squad ― or maybe it’s the electric chair now.”

N.J. governor Chris Christie at the convention frothed at the mouth criminalizing, dehumanizing and demonizing Hillary Clinton. He  belched out, “In Syria and Libya: guilty. In China and Syria: guilty. And here at home for risking America’s secrets to keep her own.”

Now, we hear it coming straight from the horse’s mouth (or is it the donkey’s?).

Hear ye! Hear Ye! “Second-amendment people” and Trump-aryans:  “Stone Hillary to death!” or “maybe there is, I don’t know…”

What else you can do with your guns and ammo “Second Amendment people”!?

What Trump is doing is nothing less than incite zombie lone-wolf terrorism.

If an ordinary citizen had made Trump’s threat, the Secret Service would have been on him or her like flies on s _ _t.

In my August 9, 2015 commentary entitled, “Republunatics at the Debate (Gate)”, I argued that Trump is out of control  and out of his mind. Crazy like a fox.

I lamented, “What a shame for the Republicans to have a buffoon as front runner!?”

I wondered if  “Trump is a man or a Tasmanian devil?” (I did not wonder if he is Lucifer.)

“Taz” Trump grunts, growls, rasps and spins like a vortex on twitter, CNN and Fox  and bites just about anything.

Words ooze out of Trump’s mouth like maggots out of carrion.

Could Trump be simply acting and becoming ornery as he sees his poll numbers plummet? Is Donald Trump insane in the brain?

Consider the psychological evidence recently laid out by Dan P. McAdams against Trump in The Atlantic.

McAdams paints a portrait of man who is incapable of differentiating acting from reality:

In sum, Donald Trump’s basic personality traits suggest a presidency that could be highly combustible. One possible yield is an energetic, activist president who has a less than cordial relationship with the truth. He could be a daring and ruthlessly aggressive decision maker who desperately desires to create the strongest, tallest, shiniest, and most awesome result—and who never thinks twice about the collateral damage he will leave behind. Tough. Bellicose. Threatening. Explosive.

Do we want to put ultimate power in the hands of a “highly combustible”, “bellicose”, “threatening” and explosive man who lies and “desperately desires to create the strongest, tallest, shiniest, and most awesome result—and who never thinks twice about the collateral damage he will leave behind”?

McAdams tells us about the real Donald Trump and why we should avoid him like the plague (or I might suggest the Zika virus):

Who, really, is Donald Trump? What’s behind the actor’s mask? I can discern little more than narcissistic motivations and a complementary personal narrative about winning at any cost. It is as if Trump has invested so much of himself in developing and refining his socially dominant role that he has nothing left over to create a meaningful story for his life, or for the nation. It is always Donald Trump playing Donald Trump, fighting to win, but never knowing why.

Donald “Ignoramus” Trump does not understand the power of words. But words are more powerful than the nuclear bomb. Words have the power of life and death.

There may be some  zombie among the “Second Amendment people” taking Trump’s demented message to heart. That zombie is not going to say, “Trump is only joking.” (At the 2011 White House Correspondents’ Dinner, host Seth Meyers quipped, “Donald Trump said that he was running for president as a Republican. That’s funny, because I thought he was running as a joke.” Ha!

No one is laughing at the joke.

There is no joke about making terrorist threats or inciting terrorism against a presidential candidate.

The threat of random violence and the reality of violence against women fills the criminal court dockets of the nation. Threatening women with violence — gun violence — is a crime; a terrorist crime. It must never be tolerated!

ISIS, ISIL, Al Qaeda and the rest of the jihadist terrorist groups use words to mobilize their supporters and wannabe members to commit crimes against humanity.

What Trump has done in his Wilmington speech is no different than what ISIS,  ISIL or Al Qaeda do to recruit and deploy their jihadist terrorists.

In Wilmington, Trump effectively issued a fatwa against Hillary. He is hoping one of his jihadist “Second Amendment people” will heed his message and carry it out.

Donald Trump is a dangerous, reckless, narcissistic, thoughtless, mindless and a malignant repub-lunatic!